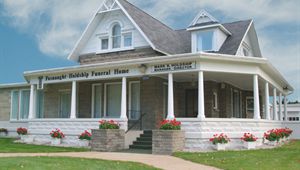 The Holdship Family of Funeral Homes began in Marion, Michigan in 1998 when owner, Mark Holdship, purchased the Fosnaught Funeral Home. Over the years other funeral homes with long-standing histories in their communities have been added to the family-owned company and we are blessed to be a part of seven communities across northern Michigan.

Established in 1947, the Fosnaught Funeral Home has always been locally owned and operated. The current owner, Mark Holdship, took over in July of 1998 and is only the third owner in 73 years. The Holdship name was added to the business in 2004, now the Fosnaught-Holdship Funeral Home.

The Hitesman Funeral Home has served Cadillac and the surrounding areas since the 1920s. It had gone through several ownership changes over the decades when Mark Holdship purchased it from Robert Hitesman in 2000. The Holdship name was also added to the Cadillac location in 2004 when the building was completely remodeled, creating a barrier-free space and chapel expansion, which now holds over 300 people. In 2014 the parking lot expanded to over 100 spots, allowing for the Hitesman-Holdship Funeral Home to better serve their families with large funeral services.

James and Mae Young opened the doors of Young Funeral Home in 1936. In 1975 James' son, Richard Young, and his wife Susan purchased the family-owned business. In 1996, Dick and Susan's son, Rick, returned to Lake City to begin the third generation of funeral directors in their family and purchased the business in 2002. The Young Funeral Home became a part of our funeral home family when Mark purchased it from Rick and Ann Young in August of 2018.

The Holdship Family of Funeral Homes also brought new life to McBain’s original funeral home that had been previously closed, opening it up in the fall of 2019, eager to serve the McBain community.

The Holdship Family of Funeral Homes is dedicated to being a part of the communities we reside in and strive to serve families with excellence during their time of loss. It is our goal to provide you with services that represent a celebration of the life your loved one lived with a time of remembrance that is customized to your family's needs and values. We pride ourselves in being family-owned and operated and are excited for the next generation of funeral directors in our family. Mark’s daughter, Holly Christy joined the family business in December of 2019. We look forward to many more years where our family can serve yours.

You are welcome to call us any time of the day, any day of the week, for immediate assistance. Or, visit our funeral home in person at your convenience.